I consider myself to be pretty adventurous, but sometimes even we adventurous folk fall into the awful trap of thinking you like your routine a lot more than you do.   Don’t get me wrong, routines are great. I like them for reasons of health, productivity, and comfort.  To me, workouts and healthy eating are a matter of waking up at the right time each morning and buying groceries with enough regularity that you don’t reach those scurvy-inducing busy weeks where floating pepper jack cheese into a bowl of ramen passes for dinner. I also believe that working toward your goals a little bit each day moves mountains, but man:  I’ve been caught in a rut where my Saturdays and Sundays are dedicated to half-assed work on a few yet-outstanding  projects… and I’ve forgotten to make time to, you know, live.

I think this is why I was so excited when a friend  invited me to volunteer for the hurricane relief effort with her.  By this point I had already spent a lot of breath explaining to out-of-towners that I was fine, Yes New York got crushed, Yeah I was in a lucky place, Yes I had internet, etc…. but that’s really just a lot of talk for a non-experience.  And I always feel like the biggest hurdles to any sort volunteering are knowing how to start and going alone. So thank you, Teresa, for tackling the hard part.

We met up in Williamsburg and took the G train out to Red Hook, the lower part of Brooklyn that got storm-pounded and very badly flooded. From the rally point we were asked to join a clean-up crew. We said yes, but stood stiffly while we waited for the details to be given to us. Eventually we were scooped up by a group leader and were off to our task. 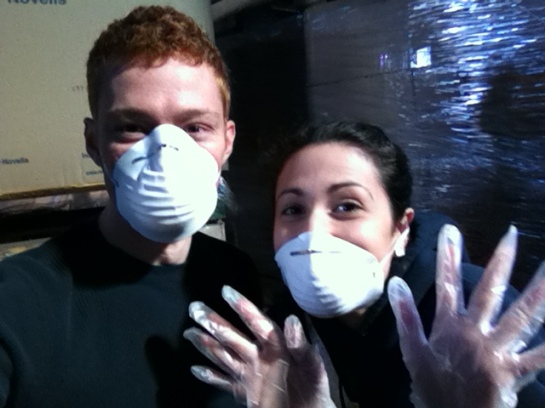 Masks multiplied the fun by two and only slightly stifled our discussion of New York Magazine vs. The New Yorker.

Along with a team of 3 others we were cleaning out a warehouse down near the water.  The warehouse had been flooded with up to 6 feet of water during the hurricane.  If we had been there for it we would have been drowning, Teresa observed. Inside we encountered an strange landscape of toppled boxes that had melted down into soppy gook.  The contents of the boxes, thousands of soda cans, were swimming in the sea-water and dirt muck. Let’s assume there were a lot of bacteria.

Our task was to break off into mini teams, separate cans from garbage, bathe the cans in a wheelbarrow of bleach and then send them through a series of tub water baths until the the can was clean and could be open without fear of infecting the drinker.  At the end of the line a team dried and stacked cans on a new pallet to be donated or sold on the cheap. 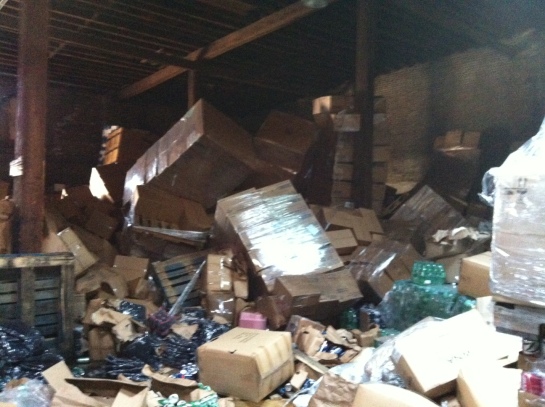 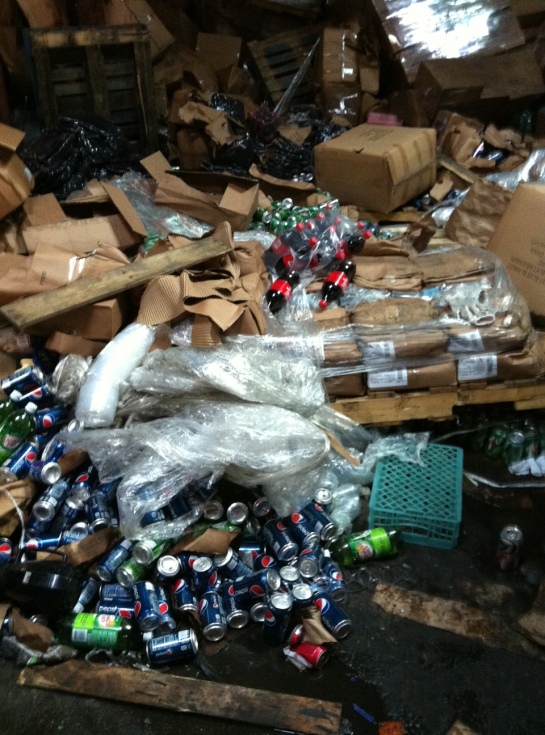 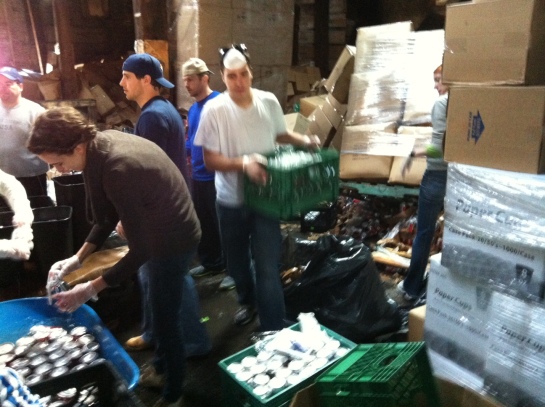 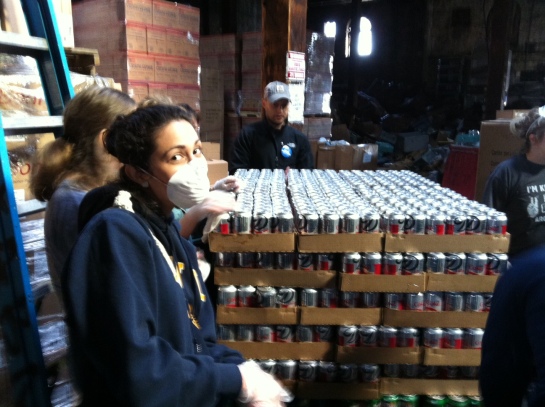 It ended up being a really fun adventure.  We made small chat with the volunteers around us, and at one point thought Mayor Bloomberg was outside. Mis-translating the Spanish of some Puerto Rican women sent Teresa scampering after the photo op that wasn’t there.

The ONLY thing that I wish had been different about this entire day is that we had been salvaging something other than soda. Wouldn’t it be a much better story if it was cans of FOOD that were being used to feed other hurricane victims in the city? I like that story. I like it so much better that I have half lied twice to certain acquaintances and suggested that there was food mixed in with the rubble and pop.