It’s the internet age. And the clacking on keyboards have replaced the masculine huff and puff of factory machinery as the sound of progress. Just like in the industrial revolution we are streamlining our digital processes, and pushing out more content faster, faster, faster.

But Haste Makes Waste, and already we are up against an ocean of unimportant filler. A few posts ago I talked about Robin Sloan’s tap Essay Fish about finding content you LOVE on the internet (a purposeful trumping of the work LIKE), and while it’s true that there are good articles, and great photos, and fascinating things to learn, there’s also a deluge of tweets and statuses and videos and nothingness to shift through.

And whats worse?  I’m creating some of it.  I suffer from a new disease called I-Don’t-Post-Enough-on-Facebook-phobia.  This disease is one part careerism, and one part not wanting to be forgotten.  Living in New York it’s easy to observe the super-networkers rising to the top. Very often these are the types that are pumping out social media statuses 10+ times a day.  My mind doesn’t seem to go there as naturally. In the middle of a fun conversation or an adventure with friends I never think to stop and say: “this would be better if I shared it on facebook!”

There’s a lot of philosophy that comes into this debate (and I don’t intend for this to be that kind of blog), but for now I just want to say that when I read headlines like Do You Hire For IQ, or for Klout Score? I wanna throw up my hands and shout Klout Score?? is this another thing we have to obsessively monitor?

Speed, More, Most, Largest, Fastest, First: These seem to be the internet’s core values. But I beseech any readers of this post, let’s make sure BEST stays in the mix. I personally am built for Quality, not Quantity, and I don’t want my kind to go extinct. So, I’ll try to add value (hard as that is when the reader determines the value of your posts!) and I’ll try to refrain from any fear induced posts that I don’t really want to make, and you don’t really want to read.  Am I wrong to think this?  Am I wrong to think “Let’s cut back on the noise!”

Am I wrong to blog it?

It’s very strange to turn on the TV to images of havoc when ultimately I ended up having such a calm night in my neighborhood.  If I hadn’t known it was a Hurricane I would have thought last night was just kind of stormy, not devastating.  The mood was light where I lived. A small handful of people wandered out to bars to socialize in the stranger-than-normal calm of NYC.

What’s funny is that the sensationalism in the news reporting is very easy to catch when it already feels in-genuine  Looking at the TV screen, then looking outside my window to my calm street I wanted to shout: Liars! but knew that the storm really was brutal in some places.

At one point I even joined in the twitter fun by passing this image around: 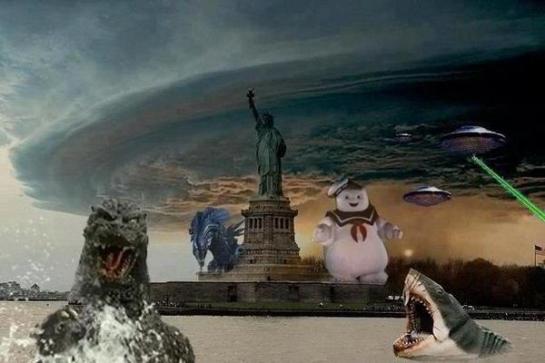 But in all seriousness, I feel very happy to have escaped last night without any danger. And it’s provided some nice cuddle time with the boyfriend.  Although he did make us watch the shining… on a night when things are already creaking and the power might go out at any minute.  Can you imagine?!

I let slip to my boss recently that something has changed in me and I may be now more interested in journalism than I actually am in theatre. I’m not quite sure why this is happening to me (it might be a phase!), but I know I’ve become enamored with the “ideas circuit” as I once heard it called. What’s the idea’s circuit?  I’m not quite sure who coined the phrase and what exactly they meant, but I imagine it to be entities like Slate, NPR, Ted Talks, RadioLab; and people like Neil Degrass Tyson,  Malcolm Gladwell, and (until recently?) Jonah Lehrer. 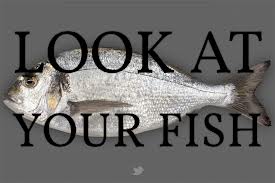 Well recently  I came across a new one for me: Robin Sloan.  Robin has led what sounds like an interesting life being a Media Inventor.  In his own words, these are people that are “primarily interested in content—words, pictures, ideas—who also experiment with new formats, new tools, and new technology.”  Robin held a position in this vein at twitter in the early years of social media. And Why am i talking about him? well he’s created this mobile app called FISH which he describes as a TAP ESSAY. Basically it’s an essay broken up into slides, and you tap the screen of your iphone to advance while you read it one slide at a time. Each slide contains about one sentence (or sometimes one word, for dramatic effect) and is styled slightly differently in terms of font and colors to make the journey dynamic.  And I really love it. Sloan’s thesis of the essay you can read for yourself, but I want to say that I think the delivery of the message is one of my favorites that I’ve ever seen.  Here’s a list of reasons why:

It’s a really well done product.  I have actually loved “slideshows” for a long time (mostly for that reason that you can control how  much writing is released and pull major focus to a point if that’s what you want).  A while before discovering Fish: A Tap Essay I created a “click-through” essay in service of my Undergraduate Alumni Association titled The Third Thing College Gets You, hosted on slideshare. The idea came to me out of nowhere and I’m actually quite proud of it. Every now and then I tweet it, or post it on facebook hoping that someone important sees it, stands up at their desk and shouts: That Kid’s a Great Communicator!

That will be Mission Accomplished. Enjoy The Third Thing…  below. 🙂

The 3rd Thing UC Davis Gets You from JoeRedHead

Recently I went with some good friends to a “gay days” at Six Flags Great Adventure in New Jersey. We had an excellent time, and I got to ride the fastest and tallest roller coaster in North America. Although most of us were stone sober we did finally arrive back in New York exhausted at 2AM. As we piled out of the van and hugged good bye I collected a whole foods canvas bag which I had used to carry snacks in that afternoon. Justin and I said goodbye to our friends and walked home. The next morning I realized that I had left my shoulder bag in the trunk of the zipcar.

I’m not quite sure how it happened. I think that the Whole foods bag satisfied my need to be holding something, otherwise I probably would have felt naked and would have figured it out.  Also, we were tired.

Since I live in NYC and I’m ALWAYS carrying around books, gym clothes, extra food, etc. the loss of this bag has disrupted me immensely.  But before I I really go searching for a new bag I decided I would really shop around, and take some time to think about it. Here’s a picture of the bag I lost (the colors are a little different):

There are 3 things to consider for the replacement bag:

So here are some choices.  Since this bag was Fred Perry I decided that I’d look hard at some other Fred Perry bags, but eventually the search stretched out to other designers.  What does everyone like? 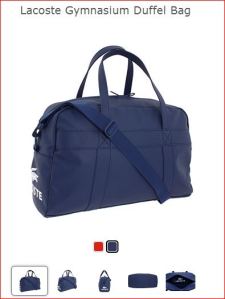 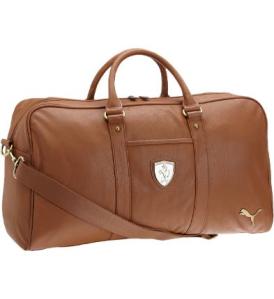 Fashion aside, there are some pricing/sizing concerns,  but it’s fun to cast a wide net .